The running gear for Cambridge 7 was collected from Leeds by a team from the Ipswich Transport Museum on Wednesday 12th March.   This marked the very successful completion of a project for the LTHS with a complete new set of running gear for a horse tram delivered in just over 6 months.  The LTHS would like to acknowledge the help and cooperation of the staff at the Middleton Railway, who machined some of the parts, used their rail mounted crane to move the wheelsets and completed running gear, and also allowed the LTHS to complete the work in their workshops. Without this cooperation the project would not have been possibe.

The running gear was taken back to Ipswich that afternoon and was successsfully taken through the museum, turned and positioned alongside the body of Cambridge 7.  It is planned to fit the running gear to the body in a few months time.

Here the complete Runing Gear is shown outside the Engine House building at the extreme end of the short length of 4 foot gauge track prior to being lifted. The lower tie bars are only temporarily secured so that they can be drilled when the gear has been fitted to the original underframe.

The gear was then carefully lifted and taken down to where the lorry was waiting and placed on some temporary wooden track for its jouney to Ipswich.

Well today was a hard but good day.  We started with a pile of parts and ended with a complete set of running gear complete with brakes.  And it runs, though there is only 6' of track at the moment.

At 9.45 the wheelsets were delivered from Multitech of Ferrybridge.

Here the wheelsets have just arrived.

The crew from the Middleton Railway arrived with the crane and the first pair were lowered onto the ground.  Up went the cry, "They're the wrong gauge.".

Then I went to set up the temporary 4' gauge track outside the Engine House.

The first set of wheels then arrived.

The crane slewed and they ere lowered carefully onto the temporary track.

The crane then went back for the second set.

Before long the second set of wheels appeared and they were then slowly rolled into the Engine House.

The dummy underframe was then lifted onto the trestles positioned by the wheels.

The various parts were then laid out ready for the assembly to begin.

The four suspension units were then attached along with all the springs, dampers and various collars and spring seats.

After lunch the sway bar was attached and work began on fitting the brake gear.

A couple of small items of machining needed to be done but by 4.30 the whole unit had been assembled and the brakes tested.  The cross beams are in but the tie bars have not been drilled at this stage so they hang below the axleboxes.

All in all a good days work. Now just get the wheels and axles painted and the brake springs fitted and it's ready for delivery.

On Wednesday we were hoping to take delivery of the wheels but for various reasons they didn't appear so I spent the day with Jim Soper painting and drilling the last of the steelwork that I had collected the day before.  At lunchtime Tony and John arrived from Ipswich with the dummy underframe on which the running gear is to be assembled. It was good to see them and various things were sorted out.

On Thursday Malcolm and I did the final machining and drilling on the steelwork and by lunchtime a nice pile of painted and drilled pieces had been assembled. 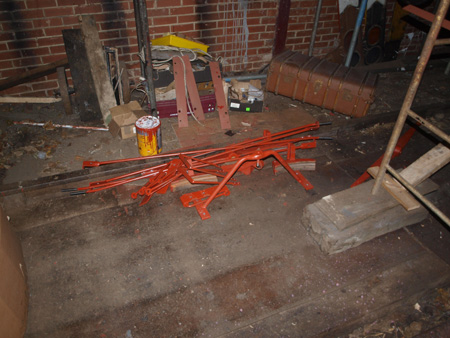 Also the two tie bars that will connect the bottoms of the axleboxes had been painted but not drilled.  That will be done in Ipswich to suit the actual underframe.

Here they are propped against the door.