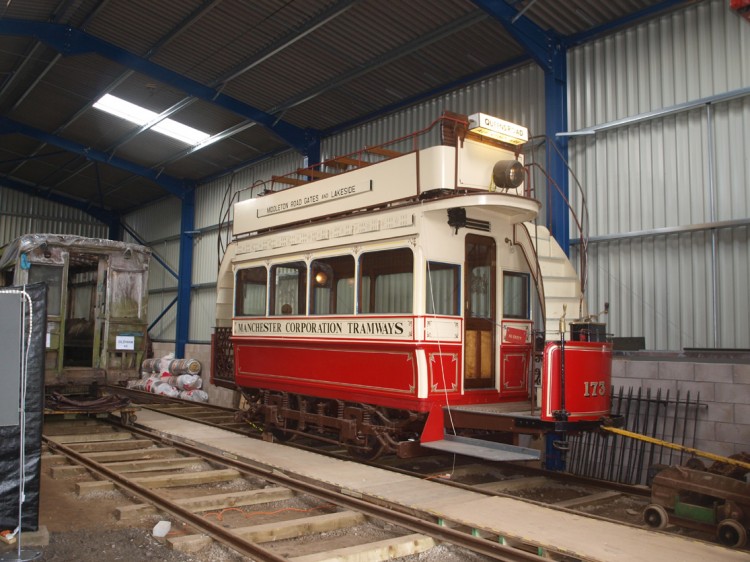 79 years ago on 23rd January 1935 the last tram ran along Queen Street in Morley.  It was heading from Worrall Street depot to Swinegate depot in Leeds following the closure of the Morley Corporation tram system the night before.  Now for one day only a tram is to return to Morley.

On 2nd August 2014 an event is going to be held on Queen Street in Morley to commemorate the outbreak of the First World War.

In the First World War many cities ran specially decorated trams to help with recruiting efforts.  Leeds had one that toured the city with the destination reading ‘Berlin’.

Thanks to the efforts of Morley Chamber of Trade, The LTHS and the Manchester Tramway Museum Society (The MTMS)  at Heaton Park a replica of a recruiting tram is going to be in Queen Street in  Morley on Saturday 2nd August.  Manchester 173, an open topped double decker is being specially decorated to look like a recruiting

tram and is then being loaded onto a low loader and brought to Morley where it will be parked in Windsor Court on Queen Street as the centre piece of the Remembrance Commemoration from 10am to 4pm.  It will then return to Heaton Park, still decorated and may well be used at an event there in September.

UPDATE  29-7-14.   THE TRAM WILL NOW BE POSITIONED ON PEEL STREET AT ITS JUNCTION WITH QUEEN STREET.

The LTHS would like to express their gratitude to the MTMS and Morley Chamber of Trade for their hard work in helping this to happen.