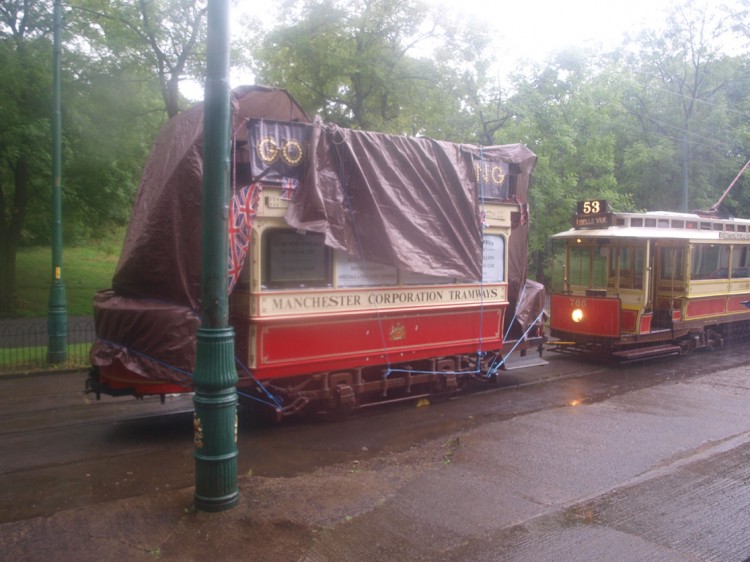 The visit to Morley went very well despite some proper Pennine weather.

On the Friday  (Yorkshire Day) a group of volunteers from Heaton Park loaded the tram onto a Gillespie’s low loader in the pouring rain.

The next morning it was taken over the hills to Morley

Arriving at 7.50am.  It was then positioned in Peel Street with a poster in front of it showing the original recruiting tram.

During the day it was used as an impromptu stage for two singers performing a medley of WWI era songs.

And the Mayor of Morley was photographed on the platform of the tram, in between rain showers.

We were rather dissapointed as Leeds City Council rescinded permission to park the tram next to the Town hall, at the last minute.  However we were able to see the Town hall from where we were parked.

Then just after 4pm  the tractor unit was re-coupled and reversed carefully down Peel Steet then turned around for the journey home.

Arriving at Heaton Park about an our later the ramp was quickly built and the careful journey back to home rails began.

The final part of the ramp consisted of two taper pieces specially made that week after a design conference over the telephone.  These had two pegs on their inside faces that  held the rails to gauge and ensured that the wheels came correctly onto the track.

Then finally at 18.02, less than 3 hours after the tram left Peel Street in Morley it was back on home rails.

I hope it won’t be another 79 years before a tram comes to Morley again but don’t hold your breath.

A grateful thanks to all the hard working volunteers at Heaton Park for making this possible and LTHS member Dennis Marshall for coming up with the idea.