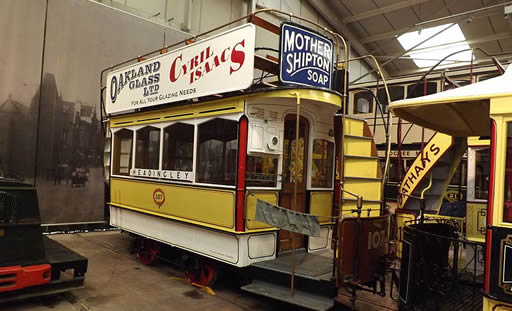 The launch of Leeds Horse Car 107 will take place over the Bank Holiday weekend of Sunday 25th and Monday 26th August at the Middleton Railway in its home city as the centrepiece of the “Leeds Festival of Transport.” This event will not only include the launch of the tram will feature steam and diesel services on the railway, a gathering of Leeds built steam road vehicles and other preserved buses.

Final details of the launch of 107 are currently being formulated but it is planned that the tram will operate on the line in the car park on both days of the event. This line is almost on the trackbed of the Middleton Light Railway which used to see the much missed Middleton Bogies operate the service. Before any public rides will be offered there will have to be some driver/crew training runs which are likely to have to take place on the first day of the event due to space constraints. But once these training runs are completed satisfactorily members of the public will be able to enjoy horse tram rides in Leeds once again. On the Monday more public services will be offered although these will be suspended between 1300 and 1430 for the official launch event which will see the Lord Mayor of Leeds attending.

An admission fee will be payable to the “Leeds Festival of Transport” and anyone who wishes to enjoy a ride on 107 will then be required to purchase a ticket, understandably so that the costs of hiring the horse can be covered. It is likely that the number of tickets for rides on 107 will be limited because of the need for the horses to change ends frequently as the line in the car park is fairly short. For those of you who have wanted to ride a tram in Leeds once again this will be a very rare opportunity as almost as soon as the event is over 107 will be transported south to Crich where it will join the extensive horse tram collection there.